Child & Youth Health & Well-being in BC

British Columbia is often considered to be the healthiest place in Canada. This was confirmed in a recent Conference Board of Canada report, which stated that BC was rated the top-ranked province for health in Canada and was third overall, behind Switzerland and Sweden, when compared to 16 similar high-income countries and the other Canadian provinces.1 But how healthy are children and youth in BC? The answer to this question is important because the childhood years have the strongest impact on the rest of our lives and provide the greatest opportunity for positive influence on a number of immediate and long-term outcomes for health and well-being.2 Healthy children and youth are more ready and able to learn and, in the longer term, are more likely to become healthy adults and productive citizens who support the continued vitality of society.3 As shown in Figure A, of the approximately 4.7 million people living in BC in 2015, 959,825 (20.5 per cent of the population) were children and youth (0–19 years).4 Figure B shows that the highest ratio of children to adults among health authorities was in Northern Health, where 25.0 per cent of the population were children, while the lowest ratio is in Vancouver Coastal Health, where 17.8 per cent of the population were children.4

The years between conception and age six are a particularly critical time when crucial physical and social development takes place.5 The quality of interactions that children have with their environment in the first few years of life—and even before birth—play a vital role in shaping their brains, their stress systems, and consequently their behaviours, their capacity to learn, and their later health, emotional, and social outcomes.6,7,8,9,10 Experiences in early life become biologically embedded, changing the way certain genes are expressed, which may result in chronic illness in mid-life and beyond.5 Positive health-promoting influences can set in motion a beneficial and health-affirming cycle, leading to optimal health trajectories.11 Protecting and promoting the well-being of children can positively influence health outcomes later in life and minimize the negative impact of adverse childhood events.5

Improving the lives of children and youth in this province is essential to the health and well-being of not only the child and youth population, but also the province as a whole. This report provides data, related literature, discussions, and recommendations for decision-makers, educators, planners, members of communities, and youth to make the changes that are needed to improve the health and well-being of all children and youth in BC.

Supporting the health and well-being of children and youth through the social determinants of health is critical. The social determinants of health, such as housing, income, education, and employment, have a vital role in determining health outcomes. This report provides a holistic view of health and reflects the best and most current evidence on the contributing factors and modifiable conditions that truly make a difference to child and youth health and well-being outcomes. 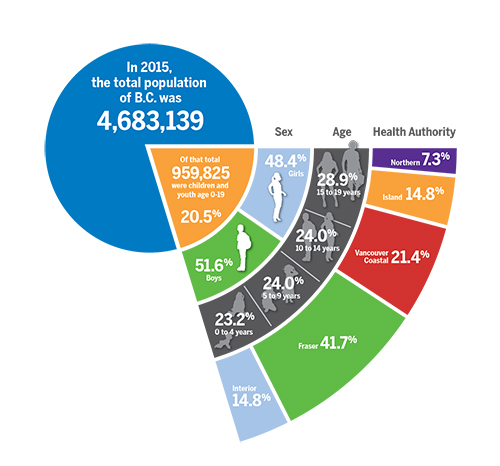 FIG B Proportion of BC Health Authority Population Age 0-19 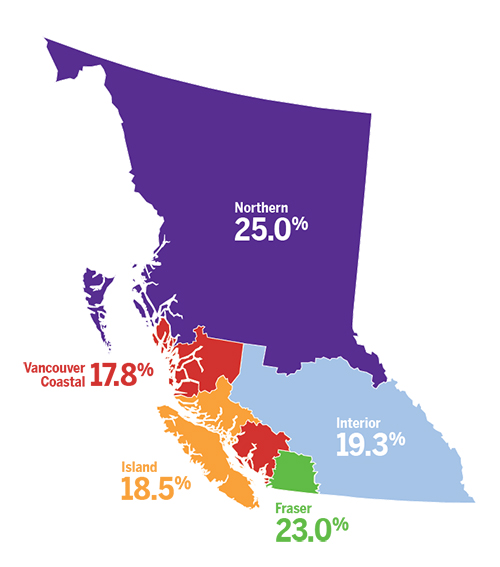 In 2013, the Provincial Health Officer (PHO) undertook a process to produce a series of indicators for monitoring the health and well-being of children and youth in BC. The process to develop the indicators and the final suite of 51 indicators were published in 2013 in the report entitled Child and Youth Health and Well-being Indicators Project: CIHI and B.C. PHO Joint Summary Report.12 This report identified modifiable indicators for which data can be collected and analyzed to define and track child and youth health and well-being in BC.

Building on this, Child Health BC partnered with the PHO to develop this baseline report on child and youth health and well-being. An extensive collaborative process brought together stakeholders from across the province to analyze the data and determine the key findings for each of the indicators, using an evidence-based population health approach. The resulting information can inform decision-making as it relates to the development of policy, programs, and services aimed at improving the lives of children and youth in BC. In addition, through BC Student Voice, a network of students from school districts across the province, youth provided input on some of the indicators and related data. Their comments and recommendations provide rich insight into these indicators and are highlighted in this report.