Cerebral palsy (CP) is a condition defined as "a group of permanent disorders of the development of movement and posture, causing activity limitation, that are attributed to non-progressive disturbances that occurred in the developing fetal or infant brain. The motor disorders of cerebral palsy are often accompanied by disturbances of sensation, perception, cognition, communication, and behaviour, by epilepsy, and by secondary musculoskeletal problems" (Rosenbaum et al., 2007, p.9).  Approximately 2 to 3 out of every 1000 children, with an estimated number of 2600 in BC, are affected by CP as a result of a prenatal, perinatal or post-natal event. 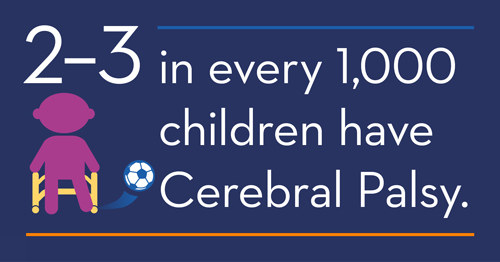 Children with cerebral palsy face many challenges as a result of their motor impairment. One impact of cerebral palsy, especially for those whose motor condition is more severe, is hip displacement.  As the hip displacement progresses over time, children can experience chronically painful hips, degenerative changes and may need orthopedic surgery. If not identified and acted upon early, the need for a complex and significant surgery can result, even possibly leading to the need to remove the hip joint, in the most severe situations. How can these effects be mitigated?

Research has shown that careful, planned tracking, otherwise known as surveillance,  of the hip status can prevent or reduce the need for these significant surgeries and prevent complications that may affect the children's quality of life. Hip surveillance involves a specific physical examination (or clinical examination) where, at points in time (defined by the child's age and severity of their CP), specific measures of hip and motor function are undertaken. Physical therapists seeing children in the children's homes, their child development centres and the schools, play a critical role in completing  these  exams.

Orthopedic surgeons, pediatricians and family physicians may also play a role, as well as being responsible for ordering the appropriate x-rays of the hips.  Specific positioning  of the child for the hip x-rays is carried out by the radiology technician and the radiologist interprets the x-rays. The interpretation of  both the x-ray and the clinical examination results together guide whether or not referral to an orthopedic surgeon is required.

A small number of jurisdictions in the world have been able to move forward with Hip Surveillance Programs for children in their geographic areas. Sweden and the state of Queensland in Australia are two examples where a program has been implemented. No Canadian programs have been established.

Through the work of Child Health BC and its donors, a hip surveillance program for children with cerebral palsy in BC is being established, the first of its kind in Canada.

To read more about the background work, including the establishment of provincial consensus, please continue on to the section immediately below.

To learn more about the now active CHBC Hip Surveillance Program for Children with Cerebral Palsy, and to find care provider and parent resources regarding the program, please click here.

Where did this work start? Work on this initiative led by Child Health BC was undertaken collaboratively with key providers in the province of BC. These providers included pediatric orthopedic surgeons, physical therapists, occupational therapists, developmental pediatricians, pediatricians, family physicians, radiologists and radiology technicians. Parents have also been key to determining the way forward.

First steps were initiated in 2011 and included  establishing the scientific evidence behind the components of  "hip surveillance". After reviewing the evidence, a  group of BC partners participated in a consensus workshop where the standard of care for BC's children with CP was established.  A report on the BC consensus statement titled 'Cerebral Palsy and Hip Surveillance: Working Towards Creating a Provincial Standard' is available from this meeting. (See below for report)

A second critical step involved determining the mechanism to feasibly deliver such a program in BC. Partners from across BC, rural to urban, and reflecting all the key professional involved and including families, assisted us, with the work culminating in a second consensus meeting regarding cross-health authority implementation. A report, "Implementing the British Columbia Consensus on Hip Surveillance for Children with Cerebral Palsy", summarizing that work is available. (See below for report)

Using the established standards of care and the provincial implementation plan, and working collaboratively across health authorities and across ministries (with child development and rehabilitation partners funded by the Ministry of Children and Family Development), a business plan for the launch of the program was established.